A child who loves agriculture and breeding, that is a perfect child (Mossi proverb – Burkina Faso). – Love of one’s country, help on the nation’s building.

Note: This proverb refers to the fact that in the olden days (and even some to this day), Mossi people were well-versed in animal husbandry.

I always loved the sound of the name Ouagadougou as it rolled off my tongue: it felt like a mouthful, but like a happy mouthful, the one you say with love: OUA-GA-DOU-GOU (WA-GA-DU-GU). Remember this is the capital of the land of upright people, the land of this proud son of Africa, Thomas Sankara. Yes, you know, the capital of Burkina Faso.

Originally, the city was called Kombemtinga, or the “land of princes.” It was founded on the 11th century by the Nyonyonse people.

The name Ouagadougou dates back to the 15th century when the Ninsi tribes inhabited the area. According to the Larlé Naba, the holder of the Mossi Empire‘s secrets, the city founders were in constant conflict with neighboring people until 1441, when they were forced to seek the protection of the Mossi Emperor Zoungrana, who was then living in Tenkodogo. In 1441, Wubri, Zoungrana‘s son, and an important figure in Burkina Faso‘s history, led his tribe to victory. He then renamed the area from “Kombemtinga” or “Kumbee-Tenga“, as the Ninsi had called it, to “Wogdgo” which meant “Come honor me“.

It is this appellation which has evolved to “Woghodogo,” then Ouagadougou from the French. Others say that the name was changed by Wubri from “Kombemtinga” to “Wage sabre soba koumbem tenga“, meaning “head war chief’s village“.  The city then became the capital of the Mossi Empire in 1441 and the permanent residence of the Mossi emperors (Moro-Naba, Mogho Naaba) starting in 1681 with Naba Sanem. The Moro-Naba Ceremony is still performed every Friday by the Moro-Naba and his court to this day. The French made Ouagadougou the capital of the Upper Volta territory (basically the same area as contemporary independent Burkina Faso) in 1919.

The name was originally « Woogrtenga » and « Wogodogo » to mean « where we receive honors, respect».  Ouagadougou grew around the imperial palace of the Mogho Naaba. Being an administrative center of colonial rule, it became an important urban center in the post-colonial era. First the capital of the Mossi Kingdoms and later of Upper Volta and then Burkina Faso, Ouagadougou became a veritable communal center in 1995. Affectionately called Ouaga by most, it is the center of the African film festival, FESPACO.

So if you visit Ouagadougou, remember that you are visiting the original land of the princes, and the place where we receive honors and respect. Isn’t it a name worthy of the capital of the land of the upright people (Burkina Faso)? Enjoy the video below about Ouagadougou.

Sibo Bangoura is a griot from Guinea, West Africa, now living in Australia. In this TEDx talk, he shares the traditions of his musical heritage with people from all over the world. While playing the Kora, a musical instrument from West Africa, Sibo sang a traditional West African song, Nan Fulie, about the importance of the Griot people – the West African musicians, storytellers, custodians and teachers of tradition through music and dance. Enjoy!

The hyena chasing two gazelles at the same time will go to bed hungry (Malian proverb).

Africa has a strong, deep, and rich oral tradition. In many countries across West Africa, this tradition is often preserved by the griots, who are historians, storytellers, praise singers, poets, and/or musicians. Often, the griot is the preserver of the history of a family, a clan, and sometimes of the nation. This is done by narrating how the family/clan/tribe/nation was founded and its outstanding achievements. In essence, the griot is a repository of the oral tradition, and is often seen as a societal leader due to his or her traditional position as advisor to kings and leaders.  The griot’s praises centers around the leader of the clan, of the tribe, and of the nation. Thus, great kings throughout history had griots: Sundiata Keita, Kankan Musa, and many others.

The Mali Empire (Malinke Empire), at its height in the middle of the 14th century, extended from central Africa (today’s Chad and Niger) to West Africa (today’s Mali and Senegal). The empire was founded by Sundiata Keita, whose exploits remain celebrated in Mali today. In the Epic of Sundiata, King Naré Maghann Konaté offered his son Sundiata a griot, Balla Fasséké, to advise him in his reign. Balla Fasséké is considered the founder of the Kouyaté line of griots that exists to this day.

Each aristocratic family of griots accompanied a higher-ranked family of warrior-kings or emperors, called jatigi. Moreover, most villages and prominent clans also had their own griot, who told tales of births, deaths, marriages, battles, hunts, affairs, and hundreds of other things.

The Cameroonian author Francis Bebey writes about the griot in his book African Music, A People’s Art (Lawrence Hill Books): “The West African griot … knows everything that is going on… He is a living archive of the people’s traditions… The virtuoso talents of the griots command universal admiration. This virtuosity is the culmination of long years of study and hard work under the tuition of a teacher who is often a father or uncle. The profession is by no means a male prerogative. There are many women griots whose talents as singers and musicians are equally remarkable.”

In Mande society, the jeli was an historian, advisor, arbitrator, praise singer (patronage), and storyteller. Essentially, these musicians were walking history books, preserving their ancient stories and traditions through song. Their inherited tradition was passed down through generations. Their name, jeli, means “blood” in Mandinka language. They were said to have deep connections to spiritual, social, or political powers as music is associated as such. Speech is said to have power as it can recreate history and relationships.

In addition to being singers and social commentators, griots are often skilled musicians. Their instruments include the kora, the khalam (also spelled xalam), the goje (called n’ko in the Mandinka language), the balafon and the ngoni.

Griots can be found throughout Africa and bear different names from country to country. A world-renowned singer and grammy award winner descending from a family of griots is Senegalese singer, Youssou N’Dour. Below is the trailer to the movie Griot. Enjoy!

Crocodile and Dog are good friends. They meet and help each other. On a party day, Dog invites Crocodile to share a good meal of beans.

The female Dog, the spouse of Dog, presents the host with a good plate well garnished. But before eating the dog says:

But Crocodile cannot sit down. He tries, but unfortunately, tired, and humiliated, he goes home to his place, leaving Dog and his wife, very happy, eating the beans without him.

Crocodile, then, prepares a good couscous for his birthday and invites his friend Dog. Dog arrives early with his wife. The smell of the sauce fills the entire household.

Unfortunately, Dog always has a wet nose. Dog and female Dog go outside to dry their noses under the sun. But nothing changes. In the evening, they still have a wet nose. Then Crocodile enjoys his delicious meal alone.

Angry, Dog leaves his friend swearing: « Beware if I ever find you outside the water! »

Crocodile answers Dog: « Beware if I ever meet you near my waters! »

The French original can be found on Ouologuem Blog. Translated to English by Dr. Y., Afrolegends.com

The beard does not tell old stories to the eyelashes (Ewe proverb – Ghana, Togo).

Imagine stumbling across your history, and learning that you are the descendant of a very powerful king? Imagine that all your life, you have lived a tough life, unconscious of your heritage, doing things, and just knowing that somehow, somewhere things should be different? Well, in 2013, during a trip to Ghana, Promise Adamah who has lived in England for over 50 years, found out that her grandfather was a very prominent Ewe King in Ghana, King Togbui Adamah II. She was handed a lot of papers in plastic bag by her aunt, and when she got home, opened it, and found out the truth about herself, and her family. Her family then decided to donate over 100 old letters and papers, official and personal documents, dating as far back as the 1880s to the Black Cultural Archives (BCA) in Brixton, London. These give a snapshot into the life for an Ewe Fia (king). Togbui Adamah II was a paramount Ewe Fia of Some in south eastern Ghana. The findings are believed to be the first of its kind to be found in such quantity and entirety in the Ewe community. Promise Adamah’s rich family history is now exposed at the Black Cultural Archives of London, it is Family Ties – The Adamah Papers exhibition. Enjoy the video below from the BBC.

For this year’s Mother’s Day celebration, I introduce you to another African classic: Elvis Kemayo – Mama. Elvis Kemayo hails from Cameroon, and is particularly well-known for this song, and ‘Cameroun, berceau de mon enfance (Cameroon, craddle of my childhood)’ Enjoy ‘MAMA’, and do remember to cherish your mother! 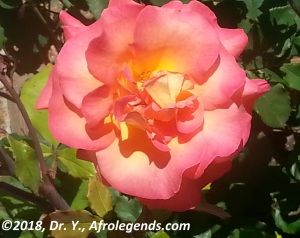 You must suffer to be beautiful (Comorian proverb – Comoros).

© Dr. Y. and www.afrolegends.com, [2009-2023]. Unauthorized use and/or duplication of this material without express and written permission from this blog’s author/ owner is strictly prohibited. Excerpts and links may be used, provided that full and clear credit is given to Dr. Y. and www.afrolegends.com with appropriate and specific direction to the original content.