As it is our tradition on Afrolegends.com, every year on October 15th, we celebrate the life of the great president of Burkina Faso, Thomas Sankara. Today, I live you with a jewel, his Speech at the United Nations on October 4, 1984. Enjoy! 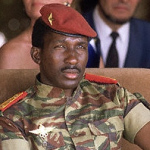 On October 4th, 1984, Thomas Sankara addressed the General Assembly of the United Nations. It was a historical speech, as only he, the great orator, could speak. It was moving, it was strong, and it was good. Below is an extract of his speech. For the whole speech, go to thomassankara.net. Enjoy!!!

“I speak on behalf of the millions of human beings … thrown out of work by a system that is structurally unjust and periodically unhinged, who are reduced to only glimpsing in life a reflection of the lives of the affluent. I speak on behalf of women the world over, who suffer from a male-imposed system of exploitation. … Women who struggle and who proclaim with us that the slave who is not able to take charge of his own revolt deserves no pity for his lot. This harbors…