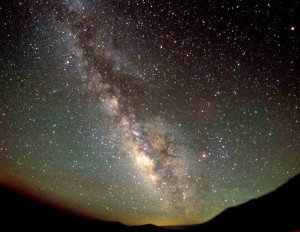 A strong-willed girl became so angry when her mother would not give her any of a delicious roasted root, that, she grabbed the roasting roots from the fire and threw the roots and ashes into the sky, where the red and white roots now glow as red and white stars, and the ashes are the Milky Way.  And there the road is to this day.  Some people call it the Milky Way; some call it the Stars’ Road, but no matter what you call it, it is the path made by a young girl many, many years ago, who threw the bright sparks of her fire high up into the sky to make a road in the darkness.

This is a South African tale about the origin of the Milky Way, from the Road Travel Africa.

In the old days, when the animals could talk, Crocodile was king of the water creatures. One year, there was a drought, and the water in the river ran dry. Crocodile sent Otter to scout for a new home, and two days later, he returned to say there was a deeper river on the far side of the farmer’s fields.

When he heard this, Crocodile called upon Tortoise and Alligator, and he explained they must go see Lion, king of the land creatures. “The veldt is dry,” he said, “and it will be a difficult journey, but we must make peace with the Lion and all his subjects, or we will die. They must help us cross the land to reach the other river.”

Tortoise and Alligator set off at once to see Lion. They carried along a peace treaty Crocodile had composed. When they arrived, they handed Lion the treaty.

Lion read it and decided he must consult with his associates, and then all the animals would hold a meeting. “Let us meet this evening at the willow tree at the far end of your river, where Crocodile has his headquarters,” Lion said. “There we can discuss the plan.”

So Tortoise and Alligator gave the news to Crocodile, who was very pleased to hear about this turn of events. “We must prepare some treats to woo our friends,” he said, so he and the others prepared many fish delicacies.

That night, with Otter and Beaver and Tortoise and Alligator, Crocodile traveled to the willow tree. There they met Lion and Wolf and Jackal and Baboon.

Crocodile was so pleased to see this gathering, a tear of joy dropped down his face and landed in the sand. “We have brought you some treats!” he announced, and Wolf and Jackal pounced with delight on the bounty. END_OF_DOCUMENT_TOKEN_TO_BE_REPLACED

Elephant said, “Vulture! cast lots to make rain for me.”

Vulture said, “I will not cast lots.”

Then Elephant said to Crow, “Cast lots!” who answered, “Give the things with which I may cast lots.” Crow cast lots and rain fell. It rained at the lagoons, but they dried up, and only one lagoon remained.

There came Giraffe, and said to Tortoise, “Give me water!” Tortoise answered, “The water belongs to Elephant.”

There came Zebra, who said to Tortoise, “Give me water!” Tortoise answered, “The water belongs to Elephant.” END_OF_DOCUMENT_TOKEN_TO_BE_REPLACED

THERE was a frightful drought. The rivers after a while dried tip and even the springs gave no water. The animals wandered around seeking drink, but to no avail. Nowhere was water to be found. A great gathering of animals was held: Lion, Tiger, Wolf, Jackal, Elephant, all of them came together. What was to be done? That was the question. One had this plan, and another had that; but no plan seemed of value.

Finally one of them suggested: “Come, let all of us go to the dry river bed and dance; in that way we can tread out the water.”

Good! Everyone was satisfied and ready to begin instantly, excepting Rabbit, who said, “I will not go and dance. All of you are mad to attempt to get water from the ground by dancing.”

The other animals danced and danced, and ultimately danced the water to the surface. How glad they were. Everyone drank as much as he could, but Rabbit did not dance with them. So it was decided that Rabbit should have no water.

He laughed at them: “I will nevertheless drink some of your water.”

That evening he proceeded leisurely to the river bed where the dance had been, and drank as much as he wanted. The following morning the animals saw the footprints of Rabbit in the ground, and Rabbit shouted to them: “Aha! I did have some of the water, and it was most refreshing and tasted fine.” END_OF_DOCUMENT_TOKEN_TO_BE_REPLACED

ONCE there was a man who had an old dog, so old that the man desired to put him aside. The dog had served him very faithfully when he was still young, but ingratitude is the world’s reward, and the man now wanted to dispose of him. The old dumb creature, however, ferreted out the plan of his master, and so at once resolved to go away of his own accord. After he had walked quite a way he met an old bull in the veldt.

“To the land of the aged,” said the dog, “where troubles don’t disturb you and thanklessness does not deface the deeds of man.”

The two now walked on and found a ram. The dog laid the plan before him, and all moved off together, until they afterwards came successively upon a donkey, a cat, a cock, and a goose. These joined their company, and the seven set out on their journey.

Late one night they came to a house and through the open door they saw a table spread with all kinds of nice food, of which some robbers were having their fill. It would help nothing to ask for admittance, and seeing that they were hungry, they must think of something else. Therefore the donkey climbed up on the bull, the ram. On the donkey, the dog on the ram, the cat on the dog, the goose on the cat, and the cock on the goose, and with one accord they all let out terrible (threatening) noises (crying). END_OF_DOCUMENT_TOKEN_TO_BE_REPLACED

IT is said that once Sun was on earth, and caught Horse to ride it.  But it was unable to bear his weight, and therefore Ox took the place of Horse, and carried Sun on its back.  Since that time Horse is cursed in these words, because it could not carry Sun’s weight:

Since that day Horse’s (certain) time of dying commenced.

BABOON, it is said, once worked bamboos, sitting on the edge of a precipice, and Lion stole upon him.  Baboon, however, had fixed some round, glistening, eyelike plates on the back of his head.  When, therefore, Lion crept upon him, he thought, when Baboon was looking at him, that he sat with his back towards him, and crept with all his might upon him.  When, however, Baboon turned his back towards him, Lion thought that he was seen, and bid himself.  Thus, when Baboon looked at him, he crept upon him.*  When he was near him Baboon looked up, and Lion continued to creep upon him. Baboon said (aside), “Whilst I am looking at him he steals upon me, whilst my hollow eyes are on him.”
When at last Lion sprung at him, he lay (quickly) down upon his face, and Lion jumped over him, falling down the precipice, and was dashed to pieces.

*Whilst Baboon did this, Lion came close upon him.

The wild animals, it is said, were once asembled at Lion’s.  When Lion was asleep, Jackal persuaded Little Fox to twist a rope of ostrich sinews, in order to play Lion a trick.  They took ostrich sinews, twisted them, and fastened the rope to Lion’s tail, and the other end of the rope they tied to a shrub.  When Lion awoke, and saw that he was tied up, he became angry, and called the animals together.  When they had assembled, Lion said (using this form of conjuration)–
“What child of his mother and father’s love,
Whose mother and father’s love has tied me? ”

Then Lion tore the rope made of sinews, and ran after Little Fox.  But Jackal said: “My boy, thou son of lean Mrs. Fox, thou wilt never be caught.”  Truly Lion was thus beaten in running by Little Fox.

HERE was a great drought in the land; and Lion called together a number of animals so that they might devise a plan for retaining water when the rains fell.

The animals which attended at Lion’s summons were Baboon, Leopard, Hyena, Jackal, Hare, and Mountain Tortoise.  It was agreed that they should scratch a large hole in some suitable place to hold water; and the next day they all began to work, with the exception of Jackal, who continually hovered about in that locality, and was overheard to mutter that he was not going to scratch his nails off in making water holes.

When the dam was finished the rains fell, and it was soon filled with water, to the great delight of those who had worked so bard at it.  The first one, however, to come and drink there, was Jackal, who not only drank, but filled his clay pot with water, and then proceeded to swim in the rest of the water, making it as muddy and dirty as he could.  This was brought to the knowledge of Lion, who was very angry and ordered Baboon to guard the water the next day, armed with a huge knobkerrie.  Baboon was concealed in a bush close to the water; but Jackal soon became aware of his presence there, and guessed its cause.  Knowing the fondness of baboons for honey, Jackal at once hit upon a plan, and marching to and fro, every now and then dipped his fingers into his clay pot, and licked them with an expression of intense relish, saying, in a low voice to himself, “I don’t want any of their dirty water when I have a pot full of delicious honey.”  This was too much for poor Baboon, whose mouth began to water.  He soon began to beg Jackal to give him a little honey, as he had been watching for several hours, and was very hungry and tired.  After taking no notice of Baboon at first, Jackal looked round, and said, in a patronizing manner, that he pitied such an unfortunate creature, and would give him some honey on certain conditions, viz., that Baboon should give up his knobkerrie and allow himself to be bound by Jackal.  He foolishly agreed; and was soon tied in such a manner that he could not move hand or foot. END_OF_DOCUMENT_TOKEN_TO_BE_REPLACED

COCK, it is said, was once overtaken by Jackal, and caught.  Cock said to Jackal, “Please, pray first (before you kill me), as the man does.”

Jackal asked, “In what manner does he pray? Tell me.”

“He folds his hands in praying,” said Cock.  Jackal folded his hands and prayed.  Then Cock spoke again: “You ought not to look about you as you do.  You had better shut your eyes.”  He did so; and Cock flew away, upbraiding at the same time Jackal with these words, “You rogue! do you also pray? ”

There sat Jackal, speechless, because he had been outdone.

© Dr. Y. and www.afrolegends.com, [2009-2021]. Unauthorized use and/or duplication of this material without express and written permission from this blog’s author/ owner is strictly prohibited. Excerpts and links may be used, provided that full and clear credit is given to Dr. Y. and www.afrolegends.com with appropriate and specific direction to the original content.