The story of Queen Abla Pokou (Abla Poku in English) is the story of the creation of the Baoule people of Côte d’Ivoire. She was a strong and loving queen who made a profound sacrifice for the well-being of her people, and thus was granted their deep love.

In the 17th century, King Osei Kofi Tutu I founds the Ashanti Empîre of Ghana. Given that in the Ashanti culture the law is matrilineal, when King Oseï Tutu dies, his nephew succeeds him. However, when his nephew dies shortly after, a war for the throne starts in Kumasi, the capital of the kingdom; this war opposes an old uncle of the royal family named Itsa, and Dakon, the second brother of the future queen Abla Pokou (born at the beginning of the 18th century). Dakon will also die in this fratricide war. Quickly, Abla Pokou, understanding that she and her followers will be next to die, decides to flee. Led by her, they walk for several days and nights, fleeing from those threatening to kill them. They soon arrive on the shores of the Comoé River, located on the frontier between Ghana and Côte d’Ivoire. But the river is unsurmountable, its waters are dangerous, and their enemies are getting closer. After having overcome so many obstacles, and walked for days, it is impossible to stop there. 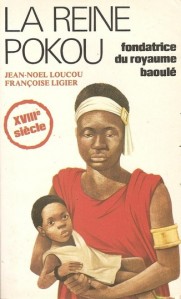 Queen Pokou looks to her court wizard for advice, saying, “wizard, tell us what the genie of the river wants from us in order to cross its treacherous waters!” The wizard replies, “Queen, the river is quite irritated, and would only stop once an offering of what is most dear to us is made to it.” Thus, the women of the court start taking off their gold and ivory jewelry, and the men bring their cattle for offering. But the wizard, shaking his head sadly, states “What is most dear to us is our sons!”

Looking upon her people, the queen decides to make the most difficult sacrifice ever: that of her toddler son wrapped on her back. After untying him, she says to him, “Kouakou(‘Kwaku’ in English), my only child, forgive me, but I have understood that I need to offer you to the river for the survival of our people. More than a woman or mother, a queen is first a queen!” She then stoically, without shedding a tear, offers her son as a sacrifice to the Comoé River.

Once the offering made, a path quickly appears within the waters of the Comoé river allowing the queen and her people to cross it. Once the river crossed, the queen finally cries, “BA OULI!” meaning “the child is dead.” This will become the name of the people “Baoulé”. Once they arrived in a good place, the tribe holds a funeral for the sacrificed child. In memory of this, the place will be called Sakassou, meaning “place of funerals.” Queen Abla Pokou will rule over her people for many years, and news of her good reign will travel very far. She will die around 1760.

Some historians claim that a big tree bent over to let the Queen and her people cross, while others maintain that a group of hippopotamuses lined up a path across the river for the queen. Either way, the story of the queen’s great courage remains the same. Queen Abla Pokou, the founder of the Baoulé people of Côte d’Ivoire, was a great queen and woman who sacrificed what she held most dear for the well-being of her people. Many African presidents would learn a lot from Queen Abla Pokou’s courage, determination, and love of her people. Today in Côte d’Ivoire, her story has just been made into a 3D movie: POKOU Princesse Ashanti. The Ivorian author Véronique Tadjo has also published a book Reine Pokou: concerto pour un sacrifice in 2005. The story of Queen Pokou and the Baoule was retold by Maximilien Quenum in his Légendes africaines. Check out the websites Naforo-Ba and Matricien.org to learn more about it.